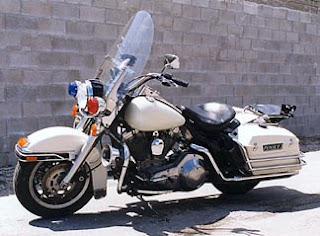 The Purple Beast aka Purple Monster aka Purple Dragon aka Barney Mobile aka Purple Rain (and more names) evolved from a 1997 Roadking that I purchased from Doc's Harley Davidson in Shawano County Wisconsin. The Police had leased it for 4 months of the summer when it was turned over to me having 800 miles on the odometer. 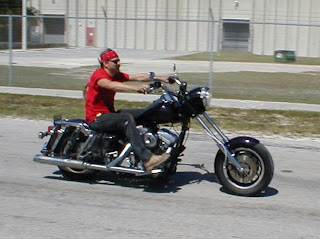 This was a great bike but it needed some personality so I decided to paint it and chop it. This was the first generation purple monster. Although it looked black, it was actually a deep dark purple. I took the bike on a 1000 mile test ride to make sure that the rake and frame was true and strong and when I got back, I was happy and decided to tear it all the way down and start from a bare frame, painting everything. 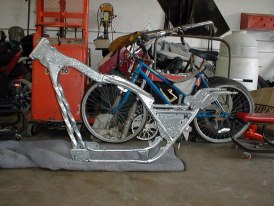 I was going to go with a purple candy over flake but when I saw the flake I thought that would be cool by itself. After arguing with the painter for days, we decided on leaving the frame and wheels flake and clear and painting the tanks, fenders and bags flake with candy purple. 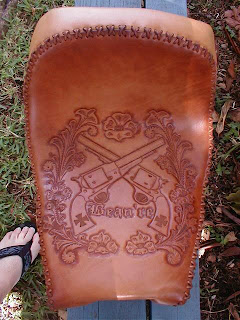 Michael P. Barclay hand tooled the seat. It was his first motorcycle seat and he nailed it. It came out so good in fact that there was a long line for his leather work after that. 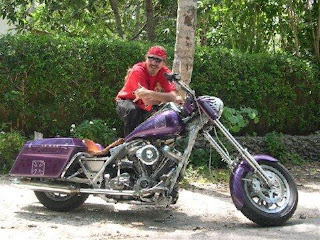 Skin at Too Brothers Motorcycle shop helped me with the reassembly and created many added custom pieces to compliment the paint. 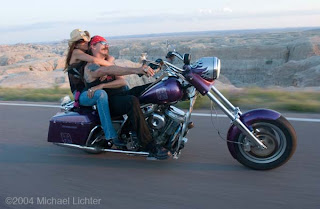 One of the best features was the Baker Drivetrain 6 speed transmission. It allowed me to cruise America effortlessly, even if I had the weight of an extra rider. 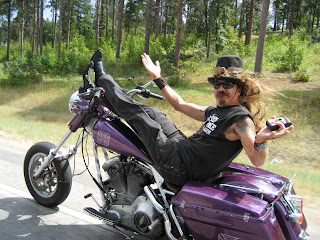 Even with the raked frame and the 10 inch extended forks, the bike rode straight as an arrow. I tested it often. 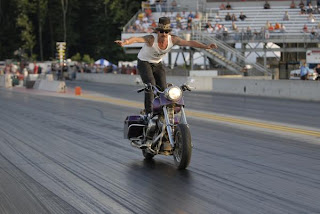 Along the way I entertained many a crowd with my stunt shows, trick riding and general tom foolery. 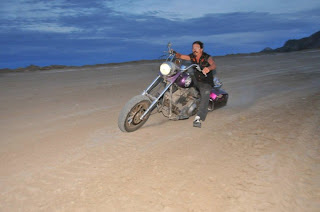 I was never one to shy away from some hot laps at a local dirt track. If you wonder how the dent got in the tank, see the video below.


At one such event, Cycle Source's Big Mountain Run 2010, while participating in the Scooter Tramp Triathlon where contestants had to run jump on their bikes, race to the river, STOP, and swim to a boat, I got a little carried away in the competition and, well, you get what we have here in the video......... 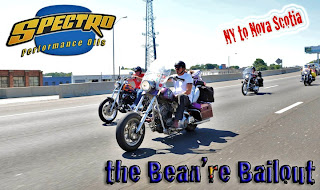 It led the way to the Bean're Biker Bailout. It was the first of a kind sweepstake where a person won a free all expense paid trip to ride with me to Nova Scotia Canada. It was sponsored by the great folks at The Wharf Rat Rally in Digby, Nova Scotia, Cycle Source Magazine, Indian Larry Motorcycles, Avon Tires, Spectro Oil and Baker Drivetrain. 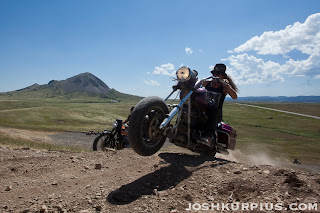 To say it lived a hard life is an understatement. I hill climbed with that bike, flat track raced, motocrossed, and every other terrain in the 300,000 miles that I put on the bike after that. I gave it hell for certain. 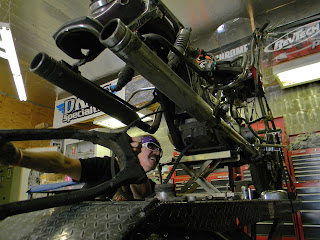 Due to the kind of abuse I put it through, I did have problems along the way like breaking the frame 4 times, broke 3 swing arms, about 6 rear drive belts before converting back to chain and after going through 5 or 6 chains, converted back to a belt.

When problems arouse I was fortunate to have friends in high places watching over me, lending me their shop and tools and offer advice and parts to keep me "livin' the dream". 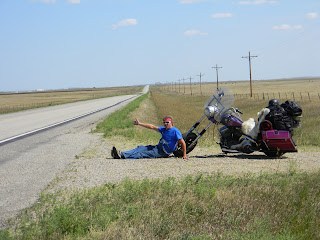 Finally after 4 continents, over 18 countries,  eleven-teen cross country trips and over 300,000 miles, the Purple Monster needed a major re-haul and to do so would alter it's character, basically creating a whole new bike so rather then salvage the parts and build a new one, Carl Olsen traded me another stock evo Ultra Classic and will keep the Purple Monster intact and preserve it for people to admire and enjoy in the future. There are talks of plans of it being displayed in the National Motorcycle Museum in Anamosa, Iowa.