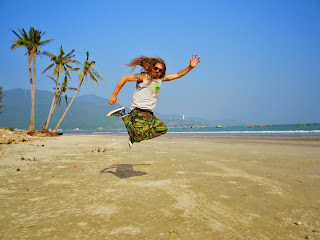 I always jump at every chance for an adventure. The past two weeks have been an adventure too but I think now it may get a little tougher as I enter into North Vietnam. Already I have noticed the peoples attitudes changing in respects to Americans. I am also having problems getting Facebook due to the fact that I am so close to China and the Chinese government blocks Facebook. It will only get worse as I get closer to the Chinese border. 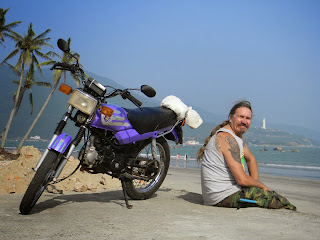 It will also be getting colder as I go north and get into the higher elevations. I decided to start my New Year on China Beach and see the sights for the day before beginning the next phase- North Vietnam. 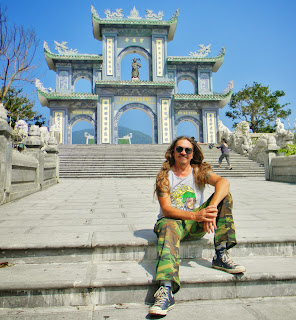 There is no mistaking that I am Asia when you look at all the architecture. 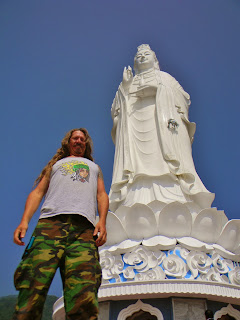 On the Son Tra Peninsula in DaNang stands a 67 meter statue of the Bodhisattva of Mercy. The statue construction has been recognized as the highest Bodhisattva of Mercy statue nationwide. It is 17 meters in diameter and has 17 floors. Each floor worships a different Buddha. The 17th floor has a flight of stairs leading to the statue’s head. It was completed in August 2010. If you look closely you can see men hanging from ropes as they are putting another coat of paint on it. 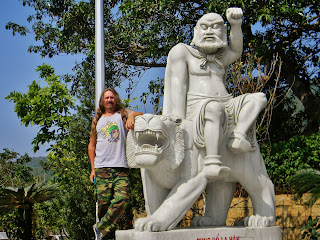 They have 17 of these hand carved marble statues there. This was my favorite. To me it says " Anger awaits if you keep poking the tiger." 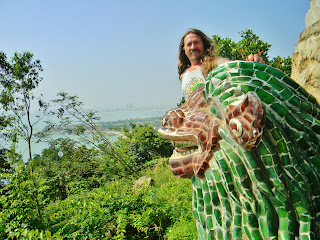 This glass covered statue sits on Son Tra Peninsula with the view in the background of DeNang. 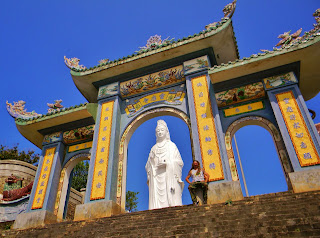 I love the view through this archway. 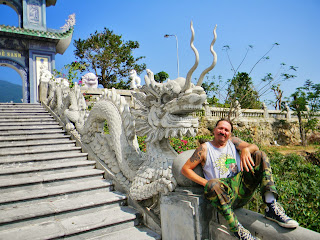 The stair rails are the best. I seen many sets of stairs with dragons for railing. 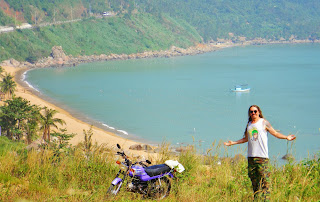 This the the north side of the Son Tra Peninsula. It has several private resorts with their own private beach for 100 dollars and up a night. Now this my sound dirt cheap to you but the hotel that I am staying at just blocks from the beach is $12.50 a night for a single room. 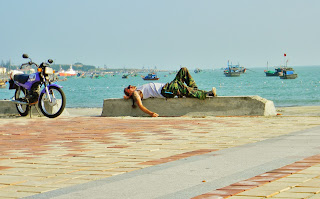 Resting at the harbor after a long day sight seeing and a feast on some fresh seafood. Wondering what the meal looked like? Just watch this video.
This is just one day in a 3 month Asian adventure. Make sure to read about the entire adventure in my next up coming book coming out this Summer. 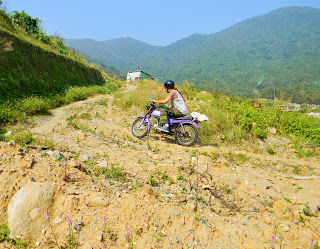 And as always, I'll be taking the road less traveled!