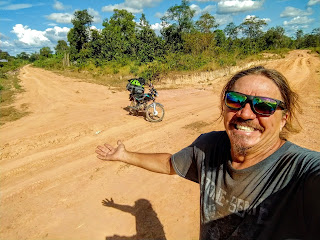 I knew my choice for route was risky at best. It really was a bad choice but I kept going even when I was advised to go back by locals. From the very start, the roads weren't roads, they were trails and they cris-crossed without any markings so I went down several before turning around. 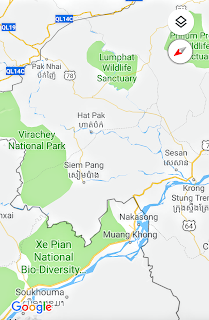 This was the map I was using. I went from Krong Stung Treng up Highway 7 to Nakasong at The Cambodian/Laos border. Loas would not let in my Vietnamese licensed Motorcycle. I had to go all the way back to where I started and take 78 to the Cambodia/ Vietnam border. I remember seeing a sign for Siem Pang. This map looks like it has a good highway going towards 78. I rode hours to get there and kept thinking the dirt road would get better. When I finally got there, I found out that there was no road. Still I thought how bad could it be? 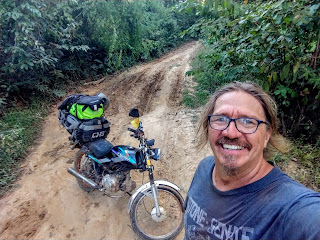 I should also add that by now, it was around 1 in the afternoon. I needed to get through here by dark or find a hotel along the way. 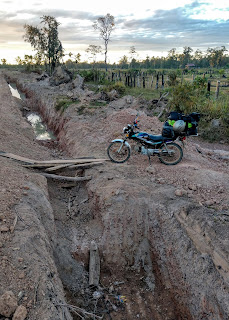 The road got worse and worse. There was also very little out there. No stores, restaurants or hotels that I could see. I knew that it was looking bad. 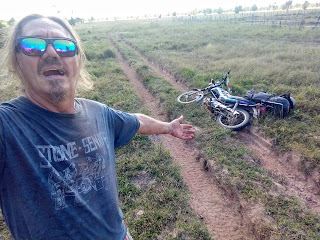 Even when the road ( trail) looked good, there was patches of deep, soft sand in the ruts. They took me down many times. 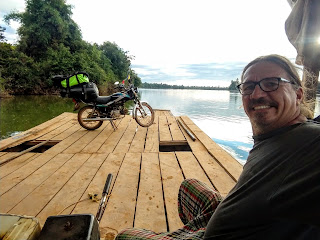 There was also 4 river crossings that I had to use ferries to get across. My map only showed 2 so I thought when I got to the second, it was over. 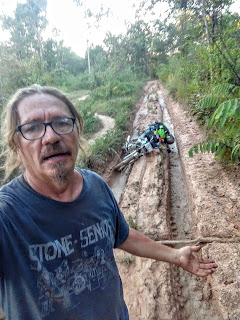 As night fall rapidly approached I tried picking up my speed by that was a big mistake. It made for faster crashes and they were taking a toll on me. I had to improvise with a plan B when I really didn't have a plan B. I was going to be sleeping out here somewhere and it was time to take some more chances. 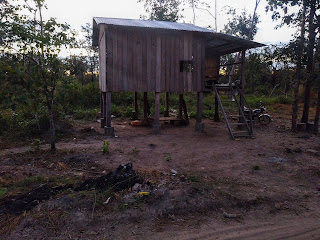 I had seen a few of these house along the way and they looked unoccupied. When I came across this one at nightfall, I pulled in. The enclosed part was padlocked but I could easily sleep on the "patio". 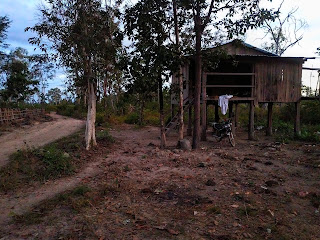 They were all elevated and I thought that was move than just for flooding. I figured maybe snakes and things would have a harder time getting me. 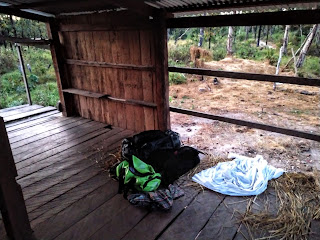 I threw some hay down to comfort the hard wood floors and then got out my one sheet that I had brought along. I also had an airline blanket but my motorcycle chain ate it in Nepal when it feel out of my bag. It was hot enough that I really didn't even need the sheet. We did get a rain shower in the middle of the night but it didn't cool things much. I awoke to a herd of water buffalo rummaging around the shack. They even rubbed up against the posts and shook the house. I was worried they were going to trample my bike. I turned on my phone to take a picture and the light from just that spooked them and they scattered. I was glad I was up high. 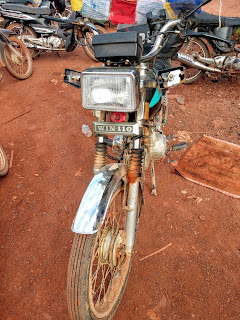 I was up before dawn and just waited for enough light to take off. I made it to pavement in a couple more hours ( and another ferry ride). The bike did good. Just broken blinkers, blown fork seals, bent handlebars, a stretched, loose and dry chain that kept coming off and bent pegs. 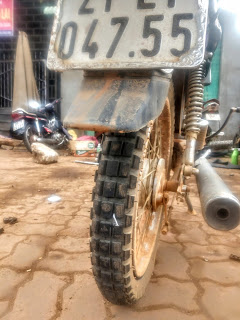 The bike got me back across the border to Vietnam and to the big town of Pleiku only to have a flat tire when I arrived. A nail was sticking out of it. No complaints here though, just another adventure. 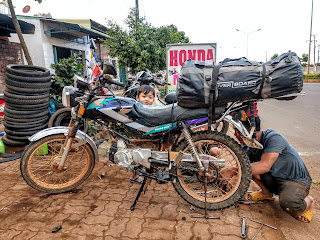 Found a shop and ready for the next adventure!
Posted by Bean're at 8:02 AM