September was a busy month 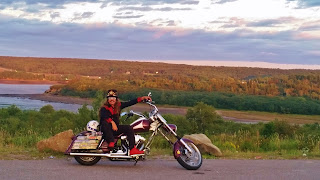 The beginning of September found me once again in beautiful Digby, Nova Scotia Canada. I was just finishing up another Wharf Rat Rally and getting ready to head back south. I needed to be in Brooklyn, NY for the annual Indian Larry Block Party but I had 2 weeks to get there. As usual, I was in no hurry at first but then decided to take a detour to upstate NY for the 10 year anniversary of the Gypsy Run. I did that last year and loved it so I did it again. The Gypsy Run isn't an organized ride in fact it is all about the opposite- several " suggested " routes and you can ride with whoever you want at your own pace. I pushed the envelope even farther and took my own route- literally down the Delaware River. I rented a kayak and had a ball. Even talked a couple of friends into parking their bikes and going along with me. 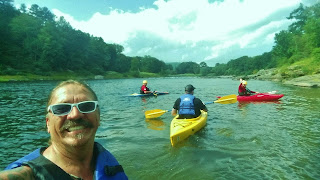 As I said, I had plenty of time but just as I added The Gypsy Run into my schedule, I also added the Moto Film Festival into my plans. It was in Brooklyn also but I would need to get there 4 days early. Brooklyn is a fun town and I had a ball the entire time but the week went fast and it was time for me to set my sights for Fayetteville, Arkansas for the Bikes Blues and BBQ with Progressive. I had 4 days to get over 1,300 miles. This shouldn't have been a problem but first I had my wheel bearings go out. This cost me over a day and after I fixed them, I was still noticing a slight sway that made me very nervous so I decided to take another day and put new swingarm bearings in. 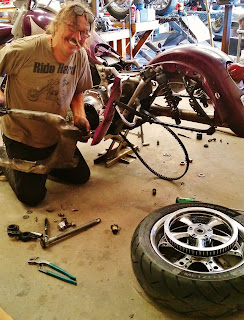 This delayed me by another day but it was totally worth it as I had forgotten the tight feeling my bike gave when it had all new bearings. 100,000 plus miles has a way of wearing things out. I made a good 600 mile day but was well worth it as I pulled into the Ozark mountains and watched the sun setting. 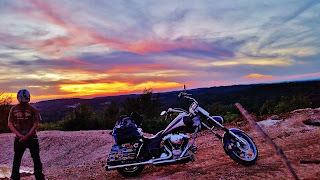 It was good to be back at the Bikes, Blues and BBQ but the first thing I needed to do was get over to Flo's Chop Shop by Progressive and get some of that grease out from under my nails. I knew that Flo's Chop shop gives not only free manicures but a whole slew of other free services too. All to show the extra distance they are willing to go for their customers. I got Jacqui Van Ham to do my nails while she wasn't emceeing for Progressive. 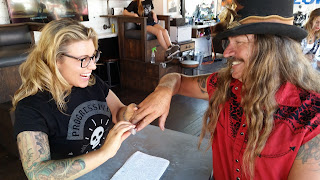 Another service Progressive gives is a free breakfast. This year not only did I get my fill of breakfast including coffee and juice but I even stashed a genuine Flo waffle in my saddlebag for a delicious snack later. This was a good idea however the syrup wasn't very compatible with the rest of my belongings in my saddlebag. 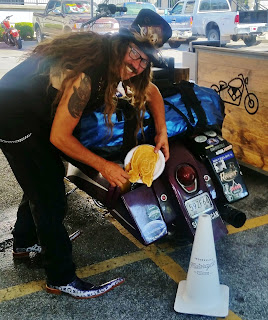 I love the riding in Arkansas and all the spots around Fayetteville are really nice. I spent as much time as I could exploring and just plain getting lost on the back roads but I did stick around for their annual bike show. It is different from most as it gets very interactive with the crowd. After the semi-finals, contestants get up in front of the crown and speak about their bikes, explaining why theirs should win. I have never seen any other shows with this type judging. My very favorite of the show was this 1956 Panhead that was customized in 1962 and survived all these years. 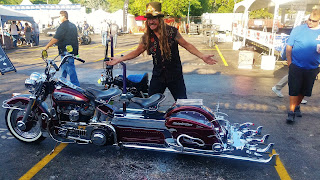 Like most of my weekends, this went way too fast and next thing I knew, it was over and time to say my goodbyes. I've never been very fond of goodbyes so I jumped on my bike and rode off but not before stopping and doing a photo shoot with one of my favorite photographers that also works for Progressive, Jeff Klaum. He got some great shots. Click HERE for one of those.
Add in all this PLUS my birthday the following week and worn out doesn't even begin to explain the half of it so I'll just let this picture do the translation. 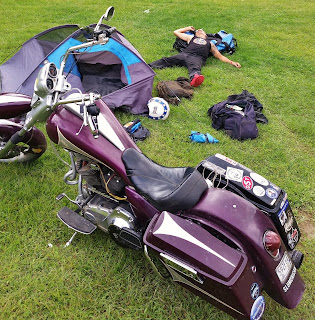 What I left out is all the people that helped my pull this month off. Thanks to them all and especially to my friends at Progressive whom I am in partnership with. Enjoy the Ride!
Posted by Bean're at 7:14 PM