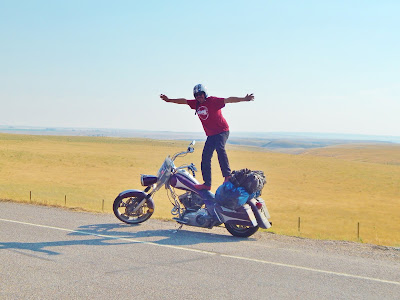 After crossing back across the border into Montana today I pulled over for this picture of my bike today. I then restarted my bike and began to head south to Sturgis. About 50 miles later, the engine suddenly died at 80mph. I tried to restart it but the starter was dead. I pulled over and checked the lights and they were as dim as could be. I was in the middle of no where and I had a dead battery. I disconnected my headlight to lessen the volts being used and tried to push start it. After about 20 tries, I got it started for about 2 seconds. This was bad. Real bad. The battery was also really hot and had acid seeping out the top even though it is a sealed cell battery. I made a couple of phone calls, including my friend Frank Kaelin at Kaelin's Custom Cycle in Louisville. He answered the phone saying he knew I was having problems- that's only when I call. Just as I'm trying to get some over the phone advice, a group of bikes passed by. They gave me the thumbs up and I gave them the thumbs down as they went by. After about a half of mile, they pulled over. They then turned around ( all 6 bikes) and rode back up the interstate to where I was pulled over. One of the riders looked at my bike and swore, " I don't believe it. It's f*ckin' Bean're". I knew this was a very good sign. 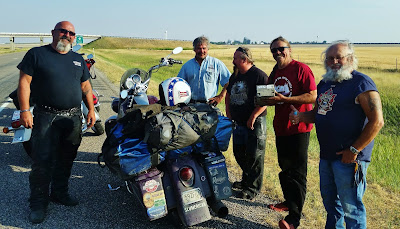 I started telling them what my problem was and the next thing I know is they had an ace mechanic named Hillbilly riding with them. He dove in with his knowledge and also a multi-meter and started figuring out I had some major electrical issues besides a dead battery. That was why it wouldn't push start. 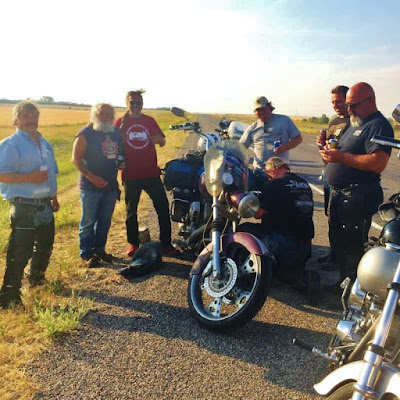 I got to talk and tell stories while he continued to work on my bike. He found a dead short that turned out to be my voltage regulator and possibly it took out the battery and stator too. They explained they were from Alberta, Canada and were doing their annual Sturgis run. This time they were doing it all on Shovelheads. And THIS is where the story gets even better. They had a chase truck with another Shovelhead in it. They said I could put my bike in the trailer and ride the Shovel. So just like that, my good luck turned and ugly situation into an awesome adventure. I'm riding a cool Shovelhead the next 550 miles to Sturgis even though my bike is getting trailered. 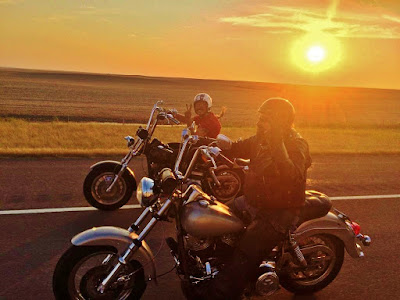 So now I'm back in the wind, running with the pack. 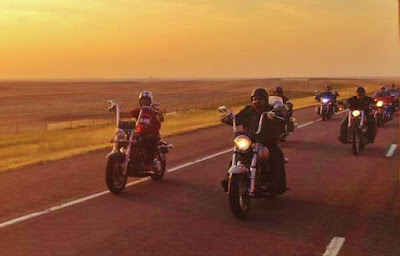