Some plans aren't suppose to work out 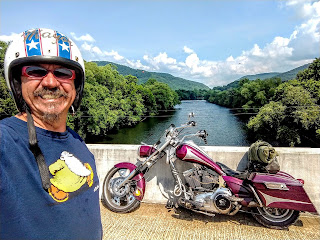 This past weekend, I had a plan. I was going to take a 400 mile ride, visit some folks in Tennessee and then turn around and ride back.  I decided to take care of some business by trying to making it to Tennessee before business hours ended so that I could renew my expired tags. I go through this every year just like last year at this time, I was riding around on expired tags in Canada. Well the good news is that I made the 390 miles ride to my legal home in Tennessee at 4 pm and was able to get my new tags. Bad news was this threw me off schedule for meeting friends. 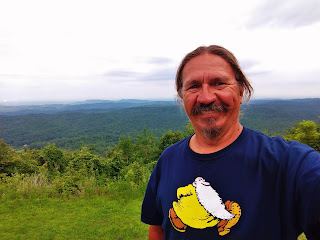 The next day, I got up at 7am but had to ride back roads 50 miles to meet up with friends again. Of course I was later so they left. I back tracked the same way I had came and 50 miles later, caught up with them at Tellico Plains. This is one of my favorite rides in Tennessee. It is the Cherohala Skyway. It was cool riding with them along this route. We climbed higher and higher till we were on a chilly mountain in the rain clouds. About the time it was looking like we were going to get wet, we descended back down and made our way to Deals Gap. 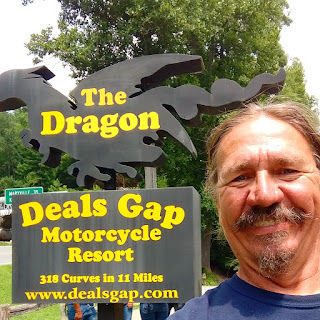 Now I've been there plenty of times and I always enjoy it but a busy weekend in the Summer can get a little crowded to me. After taking a break, my friends were riding back to Knoxville but I decided to go the opposite direction and ride east towards Maggie Valley. 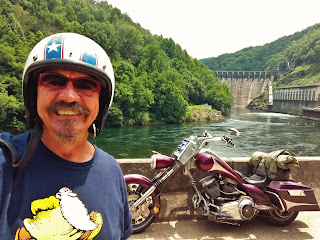 I almost made it to see my friends at Wheels through Time but then I got sidetracked again. I rode along the  Nanahala National Forest  and heading towards Tennessee again. I thought I might check out some friends at one of the many white water rafting companies on The Ocoee River. As I was riding through Murphy, NC, I remembered a back road that was a gravel goat trail over the mountain range and into Tennessee. I took this last year but only got turned around by Federal officials who had it quarantined due to what they said was a military fighter jet crashing months before. I guess part of me missing the Alaskan gravel road up to Prudehoe Bay last year, got me wanting to do more gravel. This was only 30 or 40 miles of gravel though, nothing like The Dalton Hwy ( Ice Road Truckers Road). Still, I seriously doubt that anyone would want to ride their Harley across it, much less a chopper. 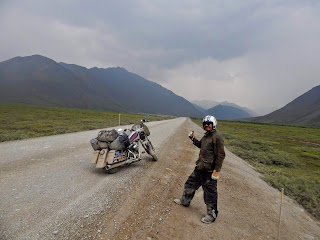 It turned out to be a lot rougher than last year. There was more ruts, washouts from all the rain they were having and the overgrowth made the single lane road even more narrow. The dirt bike riders that passed me, gave me a huge thumbs up and I could tell, they don't see many Harleys on this road. I continued on and was looking forward to learning where this road came out at. Turns out that it is what I thought, coming from the other direction, was a dead end into the Cherokee National forest for camp
grounds and also Bald River Falls. 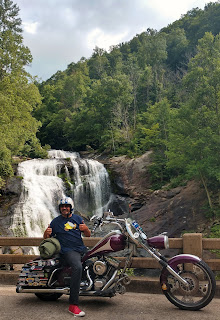 I ended up riding right up until dark, basically from dawn till dusk. I ate my favorite dinner of a 7 pepper, pan seared, ribeye steak at The Tellicafe in Tellico Plains. Man, that is a good steak. I turned out to be more tired then I knew because after that, instead of meeting up with friends for festivities, I rolled my sleeping bag out and didn't wake to the sun came up. Now just a short 390 mile ride and I'll be back on the coast of South Carolina
Posted by Bean're at 6:50 PM