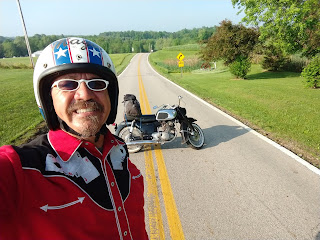 Years ago, I purchased this 1967 Honda Dream 305. I remember them as a kid and always thought they were ultra cool. It set in my parents garage, waiting patiently to be resurrected. Finally, I hauled the bike to Summerville, South Carolina, where long time friend Darren of Hawk Bros Cycles would help me get it going. 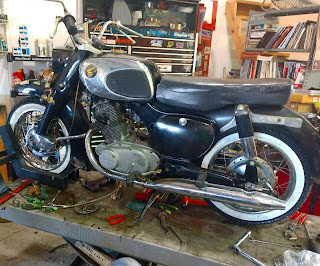 Turned out that it need more than gas and spark plugs, having sat for over 44 years. Darren and his man Johnny did most of the real work. I polished, cleaned and touched up paint and together we got the old girl running again.
This opened up some new ideas for what I was going to do with it. Being called a " Dream",  I started dreaming. I came up with it would be a perfect adventure bike for riding to South America.  As I got closer to finishing this bike, I was already reconsidering because that sort of trip could end abruptly with a chance of having to leave my ride behind. I was already developing a bond to the bike and didn't want to just walk away from it.
The next important step was for a shakedown run. I needed to take it for a long ride to test out my theory on just how road worthy my 1967 Dream was. An upcoming run was The Greasy Dozen Run .
It is in Central Ohio so one day after we got the Dream running, I threw it in the back of a truck and hauled it back to my parents in Louisville, Ky. There I would ride it on what I thought would be an easy 200 mile ride up to The Greasy Dozen Run.
Right off the bat, I knew I was in over my head. The little bike is way under powered and hopes of running highway speeds were soon abolished. Within 20 miles, the little 305cc motor acted like it wanted to seize after running along at 55 mph. I backed it down to 45 and the scenery slowly passed me by, bring back flashbacks of my cross country mini bike ride. Even on the back roads, cars would fly by me dangerously close. I went through every little town and every single street light too. The back roads added another 50 miles and made it even more time consuming. as if this wasn't enough, Summer rainstorms were in the forecast. 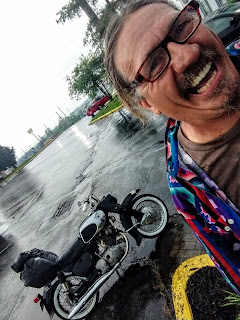 The showers came and went all day as I putted along till finally in Florence, Ky, they settled in to a nonstop deluge. I called it a night and got a motel in Florence, Kentucky, barely 100 miles from my starting point after a long and hard 4 hour ride. 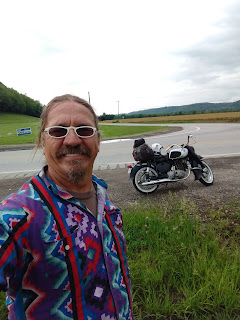 The next day proved to be much of the same, hard riding, slow going, and off and on rain showers. I was fighting a chill and didn't have a coat so I pulled in a Salvation Army store and grabbed a sweatshirt. While standing at the counter to pay for it, I looked out the window to see it was now down pouring. I put the sweatshirt back, went into the restroom and stole the plastic garbage bag out of the bin to make me a rain suit. It was took the chill off just fine. 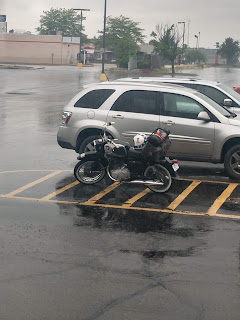 It became obvious that even if I got to the starting point of the ride ( Columbus, Ohio) I wouldn't be able to keep up. Plus they were riding the scenic back roads of Ohio and those were the very same roads that I was already riding. I opted to head straight for the finish line which is a remote farm in Peebles, Ohio. I got there and pitched my tent first, just in time for another rain shower but that made for a nice nap inside. When I woke, like mushrooms, tents were popping up everywhere. 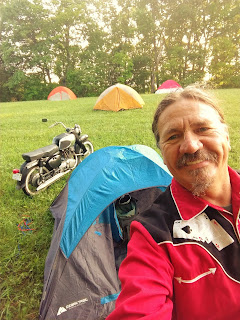 I had finally made it and the reality of my dream was setting in. This little bike is cool ( cool enough to win the Best Jap Bike category of the ride) but no cross country rider, much less a cross Continent bike. I would have to dream another dream. Now this is the best part.
Brother Speed always told me, " The Harley God giveth and the Harley God taketh away." My dream of riding this motorcycle to South America was taken away but at 1 am, around that campfire, in a small farm in remote Ohio, Bear with Old Bike Barn, did the epic giveaway- a 2 week motorcycle tour in the Himalayan Mountains! And wouldn't you know it, the Harley God giveth, and my number was pulled from the raffle helmet! I'm now making plans for my next adventure!!!!!!! 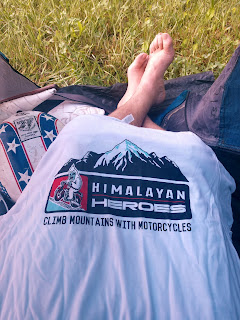 And here is a small video of theirs that explains just a fraction of what I'll be doing over there with them!