The next chapter in the Book of Bean 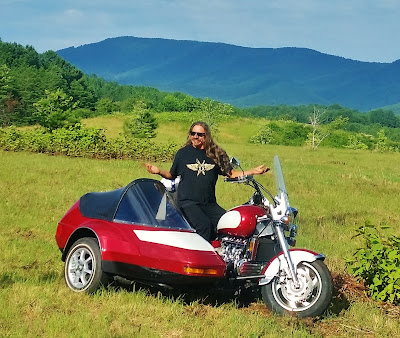 Meet the newest addition to my family. It;s a 1998 Valkyrie with a Champion sidecar. That was the furthist ( no misprint) thing from my plans but once again, that is just how my life happens.
I have been trying to get a sidecar for awhile. They are hard to come by. A Harley sidecar is not cheap and they are rather plain and also difficult to get in and out of. I had to do something soon though, as my time was running out. My plans were to kick off my " Share the Wind" in Digby Nova Scotia at the Wharf Rat Rally in August. That may seem like a couple months away but I am leaving for Alaska in 2 days then catching Sturgis on the way back then straight up to Nova Scotia and The Cabot Trail the weekend before The Wharf Rat. Yep, I needed to do something fast.
That is where this came to be. I contacted a sales ad for the complete rig and asked if he would separate them. He said no so I replied with an offer just in case. back and forth we went till finally I got him to agree to sell the car separate. I went down to Atlanta to buy it and when I seen it in person, I understood why he didn't want to separate it. He had went to a lot of time and trouble to set this up right. I was going to try to attach this sidecar to my chopper and I'm not even sure if it would have worked. I've never seen a long bike with a side hack. This rig was ready to go, safe and secure. It just made sense. I bought the set.
My first sidecar was a Champion almost exactly like this one although it was 20 years older. I though it was the same till I saw it in person. It is a much newer model. It was like they took everything about my old one that I DIDN'T like and improved it in the new model. One of the best things is the entire nose tilts forward making it easily accessible. 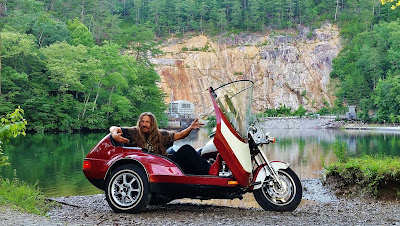 It also has electric tilt so it rides better when it is empty and no rider. It has two different tops, a 5 point mounting system and even a very large steering stabilizer. There is even plenty of room in the sidecar for someone as tall as me! 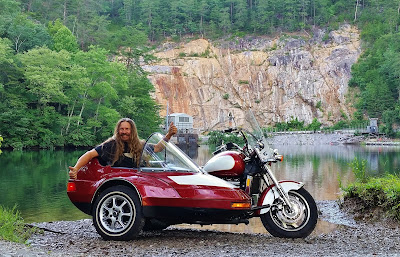 As for the bike, it has a 1500cc Goldwing motor. It is a 6 cylinder and even has 6 carbs. I just put 179 miles on it today through The Smokey Mountains and I gotta say, it really performed well.
Now the question is, do I take this rig to Alaska or do I ride my chopper? I got plenty of time to think about it. I'm not leaving till Tuesday ( 36 hours from now.) Monday I'm going whitewater kayaking in the Ocoee River and then I'm packing for the trip.
Posted by Bean're at 10:33 PM