an easy day that never happened 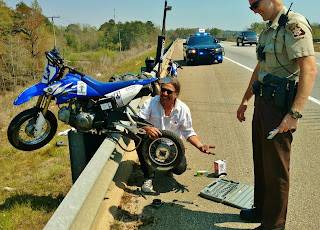 Our second day was suppose to be an easy one. We were going to do 137 miles to Dothan, Alabama and Accurate Engineering where we were having a fundraiser for The Aidan Foundation. I rolled my bike out of the hotel room only to discover, I had a rear flat. I pushed the bike to a gas station, pumped them tire up and tried to make some miles. Tim informed me that the actual miles to Dothan  was 160 ( an extra hour and a half away). I stopped several times to check the tire. It seemed to be holding air. For a couple hours were rode on. I stopped again to add air but it was ok. We pulled out and about 2 miles away the rear tire lost all air and came off the bead. At 31 mph, it got scary quick. The bike went sideways in both directions before I could get it stopped. Lucky to have avoided an accident, we started to look at our options to fix it on the side of the road. We had a can of fix a flat but that did absolutely nothing. There was a giant nail in the tire and tube. A local police officer stopped and he was a true blessing. He rode time to the bike shop to get a tire then to he private home to get tools. After I fixed it, he even gave us the tools needed to fix another flat. this really proved invaluable. About 5 miles down the road I had another flat at full speed. It resulted in a crash. 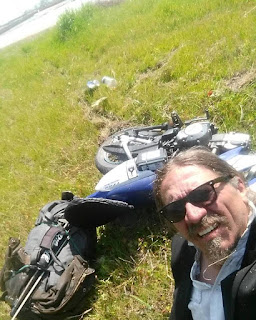 The bike went down but luckily on the right side and I was able to air it for the grass. I spun a 360 down a grass ravine and came to a stop with the bike on top of me. That little bike was heavy laying on top of be in a fetal position. I had to crawl out before I could lift it the rest of the way off of me. Tim was in front of me so he hadn't noticed I had crashed yet. So the first thing I did while I was still on the ground was take a selfie. The grass was soft and I was just dirty and not hurt. With all out tools, were were able to pull the tire and try and patch it. This failed so I borrowed Tims bike and found a bike shop with a tube. I even borrowed an air tank to fill the tire with air instead of the messy fix a flat thank I was now wearing all over my Blues Brother suit. 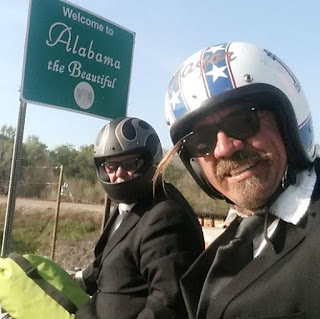 Still with all the adversity, we made it to Dothan only 15 minutes late. It was rush hour traffic and our little bikes were looking like an arcade game of Frogger zipping in and out at intersections. A block from our destination, we were pulled over again. He told us to ride on the sidewalks. I chuckled and rode away with Tim still talking to him. 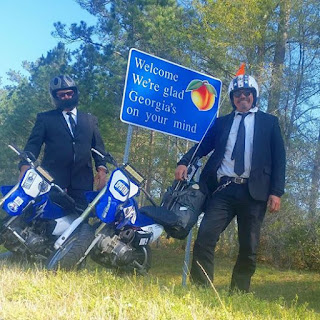 So that was our day. 3 flats, Tim ran out of gas and 3 states with an all night fundraising party after we arrived at Berry's Accurate Engineering. Even had time for a TV and newspaper interview.
I wonder what today will bring..........
Posted by Bean're at 9:16 AM